The eleven Dean’s Award for Excellence in Liberal Arts (DAELA) Laureates for this year have a mean grade point average of 3.874. Six of them are members of Phi Beta Kappa, the nation’s oldest liberal arts honor society, and seven of them are members of Phi Kappa Phi, the nation’s most prestigious comprehensive honors society. A pair of our Laureates won very competitive MUSE awards to engage in research projects with mentoring faculty here on campus.  Six presented their research at regional or national conferences. Three have co-authored scholarly papers with TCNJ faculty, with two of these papers already in press and one under review.  The DAELA Laureates have been community advisors, campus ambassadors, peer mentors, and tutors on our campus, helping their fellow students. Our Laureates are also leaders: they have held numerous leadership positions on campus – in student government, in their student organizations, in fraternities, sororities, and social service organizations, as well as members of the HSS Student Advisory Council. Together, these eleven students have completed twelve internships; and five have studied abroad: France, Germany, Argentina, England, Russia, and the Caribbean & Central America. 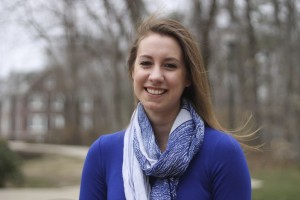 Christine has a double major: English and Journalism & Professional Writing. She interned at Woman’s Day magazine, at Women’s Health magazine, and at Unique Homes magazine. Christine has published a number of feature stories and market reports for Unique Homes and The High End. She studied abroad in Paris and Nice. Christine intends to work at a lifestyle magazine, with the hope of one day becoming an Editor-in-Chief. She is the DAELA laureate in Journalism & Professional Writing. 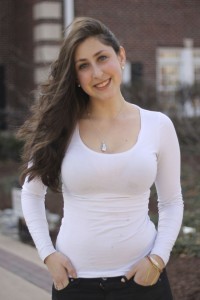 Betsy has a double major: Women’s & Gender Studies and English. She also has a minor in French and studied the language at La Sorbonne in Paris. She interned at Kenneth Cole Productions and at ISA (International Studies Abroad). Betsy volunteered in Hopewell, New Jersey, as a tutor for ESL students.  Betsy served as secretary of Sigma Tau Delta (English Honor Society), as peer advisor for the Center for Global Engagement, and as a global ambassador for International Studies Abroad. She is a member of Phi Beta Kappa, Phi Kappa Phi, Sigma Tau Delta, and Tri Iota. Betsy published a piece in The Literary and Arts Journal of Sigma Tau Delta’s Eastern Region and presented a paper at the Sigma Tau Delta 2014 International Convention in Savannah, Georgia. She plans to pursue an advanced degree in Literature and hopes to become Editor-in-Chief of a magazine that focuses on culture, style, travel, food, and technological innovation. She will also be interning at the Princeton University Press this coming summer (2014). Betsy is the DAELA laureate in Women’s & Gender Studies.

Sara majored in Political Science, with a minor in Arabic. She is a member of Phi Beta Kappa, Phi Kappa Phi, Pi Sigma Alpha, and Golden Key Honor Society. Sara is looking for a position at a non-profit organization through which she would be best situated to promotion human rights initiatives. She is the DAELA laureate in Political Science.

Christine majored in Psychology. She interned at the Center for Eating Disorders Care in Princeton, New Jersey and volunteered at Mill Hill Child and Family Development. Christina is a member of Psi Chi. Christine will be entering the PhD program in counseling psychology at Lehigh University this fall. She is the DAELA laureate in Psychology. 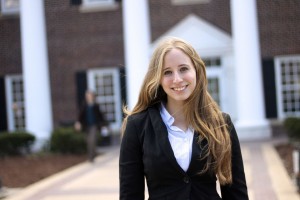 Mary majored in Criminology, with a minor in Psychology and a concentration in Law & Society. She interned with the United States Marshals Service for three semesters. She has presented research at the American Society of Criminology conference in Chicago and at the annual conference of the Academy for Criminal Justice Sciences in Philadelphia. Mary co-authored a paper (with Dr. Margaret Leigey) that has been accepted for publication in the Journal of Correctional Healthcare. Mary has maintained a job as a student clerk at the United States Attorney’s Office since her sophomore year, in addition to completing three internships with the United States Marshals Service. She served as vice president of the Criminology Student Association (CSA) both her sophomore and junior year, in addition to also serving as the secretary of Alpha Phi Sigma her junior year. Mary is also member of Phi Beta Kappa, Phi Kappa Phi, and Golden Key. She was a Jeffery R. Ralston Crime Analytics Fellow and Scholarship recipient. Mary received offers of acceptance from twelve law schools and two MA programs in criminology. She has decided to attend William and Mary Law School in the Fall, one of the top 25 law schools in the nation. Mary is the DAELA laureate in Criminology.
Matthew Knoth: 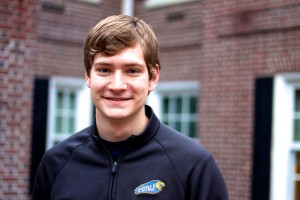 Matthew has a double major: International Studies, with a specialization in European Studies, and Spanish. He interned at an apiary in Worin, Brandenburg, Germany. Matthew studied abroad on a Semester at Sea Maymester Voyage to Trinidad and Tobago, Panamá, Costa Rica, Honduras, Guatemala, Belize, and the Bahamas. He also studied abroad for a semester at Universidad de San Andrés, Buenos Aires, Argentina; and for another semester at Universität Leipzig, Germany. Matthew has volunteered at El Centro, in Trenton, where he conducted ethnographic interviews in Spanish. He is a peer mentor for the Center for Global Engagement as well as a former American Ambassador and the current Community Advisor to TCNJ’s International House. He also served as an Oral Proficiency Hour Leader for Spanish and German on campus. Matthew is a Scholar-Athlete: he is a member of the TCNJ varsity swim team and was a member of swim teams at Universidad de San Andrés (earning Most Valuable Male Swimmer) and Universität Leipzig. In 2014-15 Matthew will have a US English Language Teaching Assistantship in Austria. He plans to pursue a PhD in International Education, with the goal of becoming a Director of Study Abroad at an American university. Matthew is a double DAELA laureate, earning this distinction in both Spanish and International Studies. Matthew is a member of Phi Beta Kappa, Phi Kappa Phi, Sigma Delta Pi, and Sigma Iota Rho. 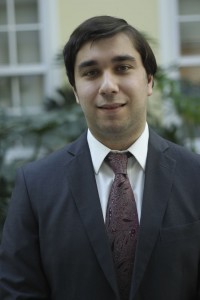 Paul majored in both History and Russian Studies. Paul studied abroad for a year in St. Petersburg, Russia. He interned as a teaching assistant at TCNJ in Dr. Paces’ History of the Soviet Union class. Paul is a member of Phi Beta Kappa, Phi Kappa Phi, Phi Alpha Theta, and Golden Key. He intends to apply to PhD programs in history, with the aim of becoming a Professor of Russian History. Paul is the DAELA laureate in History.
Aqeela Naqvi:

Aqeela majored in English. She serves as the publicist for Sigma Tau Delta and the social chair for the Muslim Students’ Association.  Aqeela volunteered as a tutor through TCNJ’s Center for Prison Outreach. She earned first place in the Muslim Observer National Essay Contest and presented a paper at the International Sigma Tau Delta Conference in Savannah, GA. Aqeela has now published several articles in The Muslim Observer.  She is a member of Phi Beta Kappa, Phi Theta Kappa, and Sigma Tau Delta. Aqeela will pursue a OD (Doctor of Optometry) at the State University of New York, College of Optometry. She is the DAELA laureate in English. 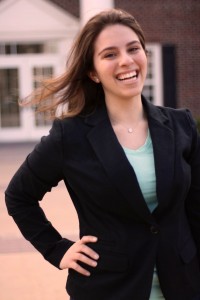 Jessica majored in Sociology, with minors in Religious Studies and Women’s & Gender Studies.  She served as the instructional intern in Quantitative Research Methods and is currently completing an internship with the New Jersey Public Interest Research Group (NJPIRG).  Jessica participated in the Mentored Undergraduate Summer Experience (MUSE) program, under the supervision of Dr. Elizabeth Borland. She served as a Community Advisor, a Student Manager of Residential Operations, the Vice President of Administration and Public Relations, President of the National Residence Hall Honorary, and as the Co-President of Alpha Kappa Delta. Jessica is a member of Phi Beta Kappa, Phi Kappa Phi, Golden Key, Alpha Kappa Delta, Tri Iota. She has presented independent research at three academic conferences: the Eastern Sociological Association’s Annual Meeting, the Northeast Regional Honors Council Conference, and the American Sociological Association’s Annual Meeting. Jessica is co-author (with Dr. Borland) of a book chapter in an edited volume, titled Savage Sand and Surf: The Hurricane Sandy Disaster (University Press of America).  She has applied for positions at private research firms and law firms and intends to go on to Law School in 2015. Jessica will be leading all HSS students into the stadium at the college-wide commencement ceremony as the bearer of the HSS gonfalon or banner. Jessica is the DAELA laureate in Sociology. 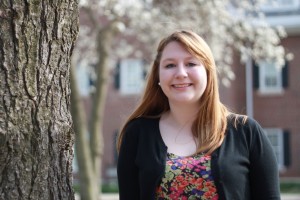 Sarah majored in English Secondary Education. She is a member of Phi Kappa Phi, Sigma Tau Delta, Kappa Delta Pi, and Sigma Tau Delta (for which she served as Webmaster). Sarah presented a paper at the Sigma Tau Delta English Honor Society National Convention in Savannah, GA. In the short term, she would like to become a high school teacher, focusing on English/Language Arts. Ultimately, Sarah plans to pursue an advanced degree in Special Education. She is the DAELA laureate in English Secondary Education 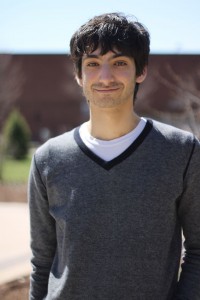 Yale majored in Philosophy, with minors in Classical Studies and Mathematics. He studied abroad for a semester at Oxford University (Magdalen College).  Yale participated in the Mentored Undergraduate Summer Experience (MUSE) program, under the supervision of Dr. John Sisko. He presented a co-authored research paper at the annual meeting of the Society for Ancient Greek Philosophy in New York, NY. Yale published an essay in the journal Dialogue.  His paper ‘A Fourth Alternative in Interpreting Parmenides,’ co-authored with Dr. Sisko, is under review at a leading international journal.  Yale has served as president of both the TCNJ Philosophical Society and Phi Sigma Tau. He is a member of Phi Beta Kappa, Phi Kappa Phi, Phi Sigma Tau, and Eta Sigma Phi.  Yale will be pursuing a PhD in Philosophy at the City University of New York, Graduate Center. He is the DAELA laureate in Philosophy.