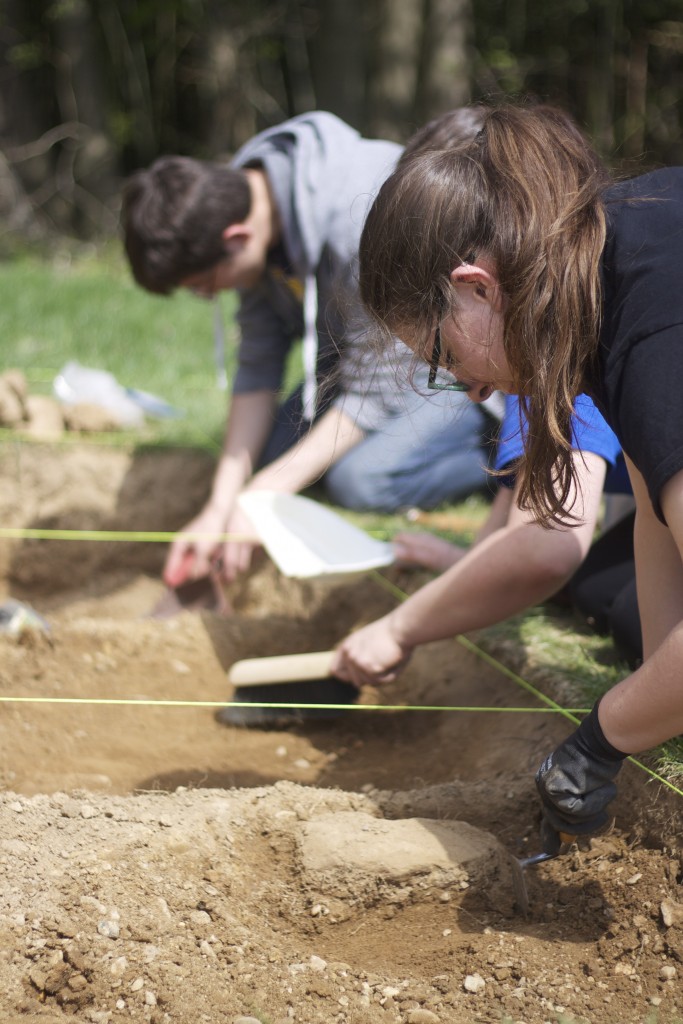 Dr. George Leader (Anthropology), pictured above, has opened up a dusty box on campus — and it’s filled with continental U.S. history. It’s the William Green House, located next to Townhouses South, and it has not been touched by TCNJ faculty or students since the 1980s and mid 1990s, according to Dr. Leader. The House was built in the early 1700s and renovated by the Green family in the 1800s, left untouched until Dr. Carolyn Metz of the College discovered artifacts in the ground around it.

Now the house has jumped back on the map this semester when Dr. Leader invited the students in his course, Archaeological Field Methods (ANT 370), to conduct archival research and resume digging on the grounds. He had been “digging around” in the TCNJ archives and found out about Dr. Metz’s research project when he made it his mission to re-open the site.

“You’re telling me we’ve got a colonial farmhouse still standing on campus and we’re not using that as a teaching resource and research project for students in archaeology courses?” Dr. Leader explained of his initial reaction to the archives. “This is too good to be true.”

Dr. Leader has spent more than a year getting permits and government permission to do work at the Green House. Now, with the legwork behind them, the students have been begun looking in the dirt and the rubble of the house for tell-tale signs of important historical events – and for anything else they may stumble upon.

“The students have their own research questions about the house,” Dr. Leader explained. He added that there is evidence that George Washington’s troops had spent time at the house during the Revolutionary War. “I let them decide where it would be best to dig.”

One of the goals of this course is to compile a paper to be published, involving the genealogy of the house owners and connecting that plus any archives discovered and the objects the students this semester may discover.

“I’ve been tasked with the historical part of the paper we’re publishing in the comings months – both with the excavations that weren’t published and the stuff we uncover now,” said Jason Hammer, senior Sociology major who has taken a leading role in the project as the Faculty Research aide for the Sociology and Anthropology Department.

In fact, on Tuesday, May 5, students sorted through some of the objects they had found and one of them was a 200-year-old clay pipe.

“I’m uncovering bits of peoples past and that’s something that’s really interesting,” said Dawn Kreder, senior Sociology major, who got involved in the dig through Dr. Leader’s Environmental Science course in Fall 2015.

Before the semester began though, Jason went to the New Jersey Society for Archaeology with Dr. Leader, where they presented Dr. Metz’s preliminary research.

“It was cool talking to a bunch of different archaeologists from the area to see what they though about some of the artifacts we had because we didn’t know what some of them were,” Jason said.

Dr. Leader explained that during a Christmas-time battle in the Revolutionary War, George Washington’s troops had confronted the British in what is now Mercer County, forcing the British to flee.

“One of the paths that the British escaped by was Pennington Road and that would have been within 600 feet of the house,” Dr. Leader said. “This house would have been a very prominent site.”

— Story and Interviews by Jack Meyers