Free and open to the public.

When a small New Jersey city realizes it cannot solve the epidemic of gun violence by arresting their way out of the problem – they try another strategy. With funding from the Attorney General’s office, the city pilots a program to support those who are at risk for reentering the criminal justice system. They call it the Trenton Violence Reduction Strategy. With the help of a formerly incarcerated activist and a team of city residents –a young women police detective creates a program whose goal is to support and mentor rather than punish those who are at risk for recidivism. Over the course of a year, we witness the struggle to keep this small but vital program alive as they confront the enormity of the task at hand. The film looks at the limitations of the criminal justice system in tackling issues driven by poverty and race and explores the possibilities of compassionate humane policing.

Following the screening, former outreach workers and Trenton residents who worked for the program Trenton Violence Reduction Strategy will speak of the impact of such intervention programs in the community. 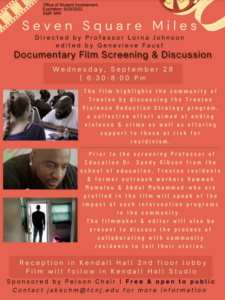